I'm So Excited! (Sports alert for those so disinclined!) 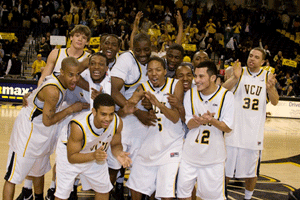 I'm about to lose control, and I think I like it!

No.........I haven't met the love of my life, but I have met a bunch of guys that I absolutely adore! That would be Virginia Commonwealth University's basketball team! Sorry girls, but I do like sports even if you don't, and especially local teams that I can relate too. I used to watch VCU basketball games religiously way back in the seventies and early eighties, but then they went through a long period of decline, and I simply lost interest. I have to admit that I really didn't care all that much about the team until the very end of their season this year, when they had the chance to win their conference tournament. They did well, but wound up being runners up, and hence were all but excluded from entry into the National College Athletic Association's national tournament. But when tournament selections were made, the selection committee saw something special in VCU, and selected them as an at large team! That meant that they had to play one more game, than all the other regularly selected teams, in order to qualify for the regular field. Critics panned them, saying they had no right to be in the tournament, when other teams were more qualified. Well.....as we trans sisters all know, who is, or who is not qualified for something, is a matter of opinion, and so it was for VCU!

They silenced their critics, by soundly beating the University of Southern California 59-46. Still there were nay sayers. They would never be able to beat Big East powerhouse, Georgetown they said, but beat them they did, and not only did they beat them, they humiliated them, beating them 74-56! They then went on to humble Big Ten conference, Perdue, beating then 94-76!

Tonight, after several days layoff, they played Florida State University in San Antonio, Texas. It was nip and tuck from the very start, since both teams were very evenly matched, but in the end VCU pulled out a one point win in overtime! I watched it all on streaming video on my laptop, since the regular station carrying it on TV, was a cable station that I didn't have access to.

As soon as the game started, I knew it was going to be a cliff hanger. Florida got off to a sight early start, but VCU adjusted defensively, and by halftime, VCU was leading by several points. The second half was a nail biter. There was no way to predict who would come out on top. Finally at the end of regulation time the two teams were tied, and so an overtime period had to be played. In the end VCU nudged Florida State by just one point, beating them 72-71! What a nerve racking game! I sat with my fingers crossed for the last thirty minutes, hoping VCU would come out on top! Now they have to go on to play the University of Kansas, who beat the living piss out of another local team, the University of Richmond tonight. I don't think VCU will let them do that to them, but Kansas may still be more than they can handle. We'll see. My heart is with VCU. They have already gone farther than they, or the University of Richmond has ever gone in the national tournament, so even if they lose to Kansas, they will still be grand heros back home!
.........We now return you to your regular trans related conversations. *wink*
Melissa XX
Posted by Melissa at 2:50 AM

Am glad VCU managed to overcome so much, but since I am so close distance wise, no relationship or other connection, to FSU and Florida I'll say 'Well!". I think that FSU was thrilled to be in the big dance, but they were not ready to really play.

We are looking at a Hot summer and things are good. We are going to Universal Studios with our 'Grandchildren' in a few weeks, hope we can keep up with them.

And even I (a most ardent non soccer person) can enjoy watching a tense, exciting game - I just don't think they happen very often ;p

Of course the problem with a nerve racking game is he risk of destroying your nails!

I hope Kentucky gets a shot at VCU in the finals. I want to have bragging rights over you.

FSU and VCU were pretty evenly matched. It could have gone either way.

Good luck keeping up with te kids at Universal Studios!

I managed to refrain from biting my nails off, but it wasn't easy. I don't understand the reason so many of our trans sisters hate all sports. Lots of women enjoy both playing and watching sports. I loved watching the World Cup!

UK blew my mind, when they beat the Buckeyes! I thought Ohio State was going to go all the way. I doubt that your Wildcats will get a shot at VCU. I love my Rams, and know how good they are, but they are going to have their hands full with Kansas. The Jayhawks are playing like an NBA team!

Being one that hates disappointment, I hate nail-biters. Short nails are worse than chipped or broken nails anyway...lol.

As a former jock (baseball), I love, understand, and appreciate the beauty, power, flexibility, strength, and coordination it takes to perform at a high level in ANY sport.

What's even more amazing is to watch a group of players, each finely tuned in the qualities mentioned above, WORK TOGETHER to overcome obstacles.

I've heard many people whine about money being spent on athletics in schools. For me personally, my experiences in athletics taught me more about myself than any other class I ever took. I learned I could do more, endure more, struggle more, and overcome more than I ever dreamed. At the same time I learned to LOVE the other players that were learning the same values.

VCU (Virginia Commonwealth University) is a 30,000 student state school, located in the heart of Richmond. It is comprised of the old Richmond Professional Institute (RPI), and the Medical College of Virginia (MCV). They have had a decent basketball program for over 30 years, but no football. There are rumors that they may start a football program in the next few years. They have been in the NCAA before, but never went past the second round. Naturally Richmond is ecstatic about them making the final four.

VCU and UK could very well face off for the national championship! If you had said that to me a few weeks ago, I never would have thought it possible, but after watching VCU demolish Georgetown and Perdue, then beating Florida. St. and upsetting Kansas by 10 points, anything is possible. It would be nice to see the Rams and Wildcats go at it for the national championship, but first we have to get past those tenacious Bulldogs from Indianapolis, and I don't think they are going to rollover and play dead for the Rams just because I want them to.